It has become commonplace to say that the Covid-19 pandemic has dramatically accelerated trends that were already underway with the digitalization of the economy and society in general.

Trade shows have been one the sectors most affected by the phenomenon as restrictions on travel and mass events worldwide prompted them to be cancelled and go fully or, when possible, partially digital.

A survey carried out by EDM Publications among subscribers of its four publications (Sporting Goods Intelligence, Outdoor Industry Compass, Shoe Intelligence and Eyewear Intelligence) indicated that an overwhelming number of respondents who cut their trade fair budgets in 2020 do not expect or do not know whether they will return to pre-Covid expenses in the future. Only 28 percent of respondents answered that they plan to go back to pre-pandemic levels.

Obviously, widespread trade fair cancellations led to a significant reduction in expenses for such events. The survey showed that over 41 percent of respondents spent less than €50,000 in 2019 for trade shows. In 2020, the percentage rose to 80 percent, with a quarter of the total panel spending nothing. In 2021, still 68 percent of respondents plan to spend less than €50,000, with some 18 percent of the total not budgeting trade fair expenses at all. The budget mentioned includes the cost of exhibition spaces, setting up a booth, moving staff and samples and other related expenses.

An overwhelming majority of respondents either did not reallocate the trade fair budget in 2020 or used the funds to secure their cash flow. Over 75 percent of respondents indicated that budget reductions were linked to restrictions on travel and events. But, more worringly for the future of trade fairs, nearly half expressed less interest because of the emergence of digital alternatives.

The survey was the opportunity to ask our subscribers open-ended questions on how they are compensating the loss of personal interaction with business partners and how they see the future role of trade shows.

The answers showed, as expected, the increased use of digital tools for meetings and presentations but also for advertisement, promotion and sales.

More interesting, and passionate, were the answers on trade shows. Many respondents were critical about the cost and organization of such events. One anonymous reply was that the situation was “not great for trade shows. We realized we don’t need them.” Another subscriber wrote “shows were already under question, Covid simply accelerates a trend. A mix of low budget physical presence and digital activities may represent the next step.”

But many respondents also highlighted the importance of physical contact and of meeting their peers and clients. One subscriber pointed out that he lacks confidence in digital means and that physical interaction remains “extremely necessary” for building up relationships as well as obtaining feedback and “off-the-record comments.” Another reader noted that physical trade shows are “an important” opportunity to find new distributors and clients and it would be “very hard” to replace them with digital formats.

Other respondents still indicated their interest in trade shows but called for changes. One person said they need to be “handled in a lighter way” focusing more on human interaction than products. Another suggested that big events “may start thinking about splitting into smaller ones. Trade shows will have to challenge themselves to re-attract exhibitors/visitors. Exhibitors/visitors also have a role to play by supporting trade shows.”

Anyhow, trade shows have already started to re-engineer themselves, developing new online or hybrid formats, and by organizing more conferences and webinars during the trade shows or at other times of the year.

The survey is based on the answers of 243 respondents. The detailed results of the study are available on request (admin@edmpublications.com). 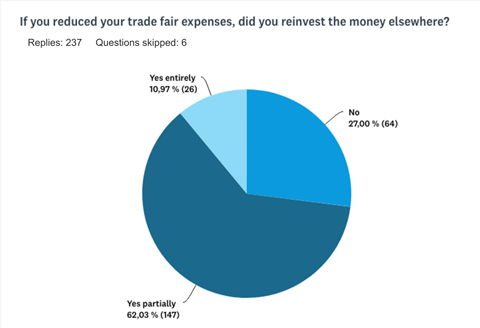 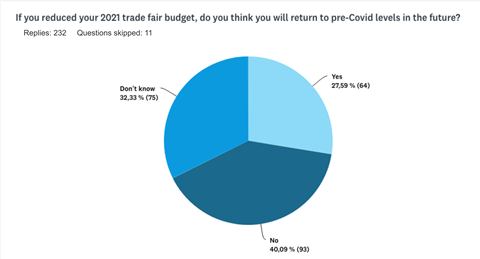