The German chemical group Covestro is using CO2, along with recycled and more sustainable materials, to produce elegant, casual and sports shoes with its footwear partners.

The campaign is part of the group’s efforts to expand the use of cardyon, a raw material for the production of polyurethanes made with up to 20 percent of carbon dioxide (CO2).

CO2 is already used in several applications such as the manufacturing of mattresses, sports flooring and car parts. The group has advanced projects for its use in textile fibers and insulating materials.

In footwear, CO2-based products for shoe components are already on the market thanks to a polyurethane flexible foam for the inner padding of running, trekking and ski boots. In this field, the chemical group is cooperating with the Slovenian footwear supplier Plama-pur.

Covestro claims that the foams are characterized by durability and a high compression hardness. “Compared with products made of pure fossil raw materials, they have more favorable physical properties and, above all, better elasticity and a finer cell structure,” it added.

Plama-pur offers the products under the name ECO Foams. Its customers laminate the cut foam pieces onto self-adhesive materials and punch them out into various shapes according to the specifications, Covestro explained.

Meanwhile, Covestro has partnered with the Brazilian footwear manufacturer Calçados Beira Rio to develop concept women’s shoes with soft foam lining using CO2 and with the Chinese shoe designer Axis Liu to produce a sneaker with film made from CO2-based thermoplastic polyurethane.

With Beira Rio, it developed an elegant women’s shoe and a comfortable casual shoe. “The result is a more sustainable overall solution with superior performance and plenty of design possibilities,” according to a statement released by the German group.

One example is the upper and inner lining of the two shoes. The base is a soft foam that ensures a good fit and comfortable footfall. Two different types of thermoplastic polyurethane (TPU) are found in the outer soles of both shoes. One of them is also based on cardyon, while the other 60 percent of the carbon content is derived from biomass. As a result, both products have a lower CO2 footprint than fossil-based TPU.

Covestro said that it is also focusing on the recovery of plastic waste as part of a program to support the circular economy. To this effect, used polycarbonate products are shredded, cleaned, and possibly mixed with new plastic, to produce Makrolon polycarbonate sheets, which can be used to strengthen the insole and heel of women’s shoes.

It noted that footwear manufacturers are increasingly relying on water-based raw materials, which emit significantly fewer volatile organic components than the solvent-based substances used in the past.

Covestro said that its INSQIN technology is used in the lining, upper and heel of the women’s pump, as well as in the synthetic upper material of the casual shoe developed with Beira Rio. The technology is based on water-based polyurethane raw materials and was developed specifically for a more sustainable textile coating. Aqueous adhesives with the polyurethane dispersion Dispercoll U provide the necessary strength in the upper and outer sole of both shoes, it claims.

Cardyon technology is also found in concept sneakers designed by Axis Liu. It was used in a thin, translucent film made of the thermoplastic polyurethane Desmopan 37385A, which matches the color and structure of the upper material. It is applied to the upper shoe by hot stamping and features good scratch and abrasion resistance, according to Covestro.

Covestro manufactures CO2-based polyols at its Dormagen site near Cologne. The facility has an annual production capacity of 5,000 tons. The CO2 is provided by a neighboring chemical plant. 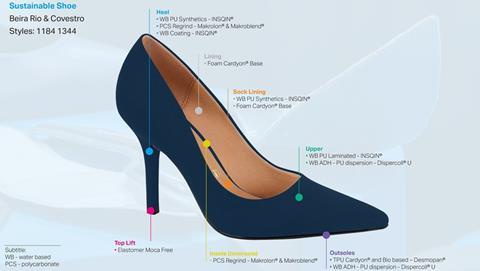 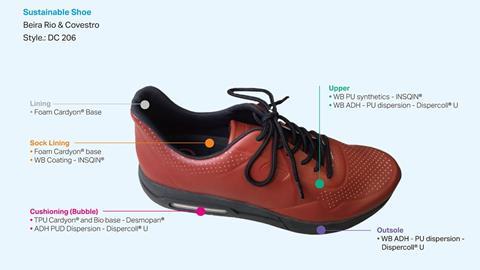